A strange peace was in effect when I drove through the area of the protests/riots in Ferguson this afternoon. Some cops were out, so were protesters walking along West Florissant Avenue.. TV trucks and crowds gathered in front of the Florissant Market & Liquor, which was robbed just before Michael Brown was shot. Boards covered a couple of the windows at the McDonalds, but the rest of the windows at the fast-food eatery were untouched. The parking lot was full. 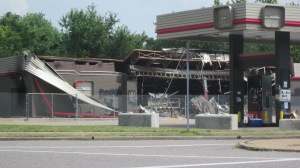 A few police officers stood in front of the burned-out-fenced-off QT, the backdrop for so many TV news reports. To the north, another QT was untouched, but boarded up as a precaution. Just north of the gutted QT,, a St. Louis County police car stood guard at the entrance to a subdivision. 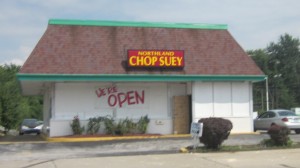 windows of the Northland Chop Suey. Smiling volunteers, both black and white, carried trash bags along West Florissant, intent on picking up trash from the previous night’s unpleasantness.

I came to Ground Zero right after I did an interview nearby. The reporter in me told me I had to see it myself. I drove through, my windows up, my doors locked. But it was clear I would have been in no danger had I walked around.

In Ferguson, West Florissant is a busy commercial street that connects Interstate 270 on the north and Interstate 70 on the south. Eventually, it becomes Tucker Boulevard in downtown St. Louis, then Gravois Avenue leading south. My house in South St. Louis is just a few minutes from Gravois. Tonight I’ll watch the reports on TV about the violence in the area I just visited.