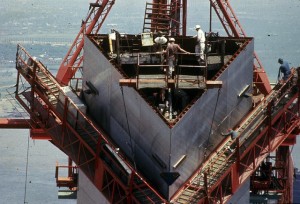 Readers of page 108 of The Making of an Icon: The Dreamers, The Schemers, and the Hard Hats learn that it wasn’t easy to work on the Gateway Arch, and not just because of the heights.

In June 1965, nearly six months before the topping-out ceremony for the Gateway Arch, the electrical systems subcontractor for the project reported that most of the electricians originally hired for the job had quit. They groused about a tilting sensation and claustrophobia in the curving, narrowing legs. Louis Sachs, president of Sachs Electric Co., said workers never felt like they were standing up straight. Ralph Scanga, who was in charge of engineering for the firm, described it as “walking in the Fun House at the old Forest Park Highlands.” The reference was to a popular amusement park on Oakland Avenue that burned down in 1963. Worse, until an electrical lift was installed in May 1965—just months before the topping-out ceremony—workers had to walk up hundreds of steps with their tools at their sides. “Since there is plenty of other construction work available, a good many decided the thrill of working on the Arch wasn’t worth the effort,” Scanga said.