Copies of The Colorful Characters of St. Louis just arrived at the warehouse. Details and pictures when I pick them up at 3:30.

Everybody naps, but nobody naps like I nap. I train for them like Michael Phelps trains for his gold medal swims. I take marathon naps. This weekend, sad to say, I’m taking my last good naps for a long time. I’ll have my first media interview about my new book, The Colorful Characters of St. Louis, on Wednesday. The books arrive at the warehouse on Thursday.  From then until after Christmas, everything’s a blur.

The big event early on will be my fun-filled release party, from 2-5 p.m. Sunday, October 2 at the Royale, 3132 South Kingshighway. Or did I mention that already? It’ll be a great chance to buy a book and have me sign it, greet some Colorful Characters I wrote about and get some great food and drink from Colorful Character and Royale owner Steven Fitzpatrick Smith. If you miss it, check the page on my website about where I’ll be. But first, get in your nap time.

Of course they haven’t. On the fiftieth anniversary of Star Trek, nobody’s yet seen anything like The Colorful Characters of St. Louis. That’ll soon change. My book about eighty bigger-than-life St. Louisans comes to the Reedy Press warehouse on Sept. 15 and to stores shortly thereafter. Your best chance to get an autographed copy will be at my fun-filled release party from 2-5 p.m. Sunday, October 2 at the Royale, 3132 South Kingshighway. Buy it there, have me sign it, and boldly read what no one has read before. 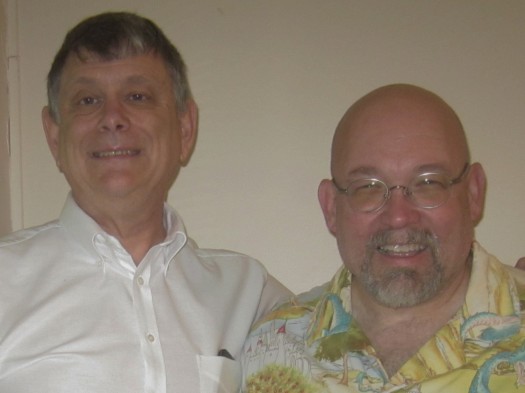 I’ve written many times that an author isn’t done when he turns in a manuscript. There’s still many hours of preparation for the months of selling after the release of a book. As part of that preparation for the release of The Colorful Characters of St. Louis, I spent nearly two hours Labor Day morning with Father Dominic Garramone, OSB, (right) the author of The Breadhead Bible and other fine books about bread baking published by Reedy Press. Lovers of warm bread from the oven will gain from a check of his website, breadmonk.com.

Father Dominic is a monk at St. Bede Abbey in Peru, Illinois. St. Louisans with long memories will remember Father Dominic for a cooking program he did on PBS and Channel 9 from 1999 to 2001. He’s a pro at giving interviews, and spent much of the time offering advice on the best way to answer questions during radio and television interviews. As my wife will tell you, I’m a better writer than a talker, so his advice was more than helpful. Basically, it was practice, practice, practice, and practice some more. I may not turn into the smoothest talker, but I won’t hem and haw when somebody asks me a tough question.

You say you’re not going to the release party for my new book because nobody’s invited you? You’ve just lost your excuse. Here’s your invite, just like ones I’m giving out and mailing. If that’s not enough, print it out, put it in an envelope and mail it to yourself. Then get ready to party, from 2-5 p.m. Sunday, October 2, at the awesome Royale.