This memory, from page 43 of my book, Growing Up St. Louis: Looking Back Through the Decades, is especially to me. Sidney Duerr, the kid in the front, is my uncle. He was born in 1927 and died not long ago at the age of 91. He’s pulling his younger brother, my Uncle Donald Duerr.

Here’s a bit of what my Uncle Sid told me:

When times got hard, nobody would buy anything in hardware stores, so my dad lost his hardware store in Old Orchard in Webster Groves. He moved all of his stuff into the basement. My
job was to go get the lawn mowers and bring it to him to sharpen. After he lost the store, my dad got a job at a hat company. During the Depression, my mother took care of three old ladies. The
neighbors behind us, they were really poor, and we kind of helped them, too. That’s how we got through, everybody helping out. There wasn’t any politics.

We lived right at Oakland and Kingshighway on Arco Avenue, right behind St. Louis University High School. The Depression was hard because money was very tight, and we were pretty poor.

A lot of men wanted odd jobs around the house, and my mother would give them a sandwich or something. We always had a little garden in the back, and she was generous. She would make them a sandwich.

We heard they were giving shoes out to the people that needed them, so somebody took us downtown and got us a pair of shoes. Instead of coming to a point or rounded at the toe, they came
straight across. Oh, like a box. Ugly brown. I hated them, but I had to wear them.

I was a sophomore at McBride, The teacher was called out to the principal’s office and when he came back,he told us all to be quiet. He said President Kennedy is dead, and we were of course just stunned.

We were all sent home, and I can remember riding a bus down Kingshighway Boulevard and looking out the window, and there were people on the street, but they weren’t moving. They weren’t going about their business. They were sort of standing. Some were crying. But most of what I remember is people standing there just stunned at what had happened.

This story of Susan (Waskow) Shaw’s (born 1967) pain in the stomach is on page 118 of Growing Up St. Louis: Looking Back Through the Decades.


It was probably in fourth grade. I never told anyone I was sick, because I didn’t want to miss school. I had been sick for about two days, but my stomach started hurting so bad that I couldn’t handle
it. So I went to the nurse, and they took my temperature and told me I had a fever. But then
everybody left for lunchtime and I was left alone in the nurse’s office.

My stomach was hurting so bad, making a groaning noise, but nobody was there to help me. And then something popped, and I immediately felt better. I don’t even know how to describe it
beyond that. By the time my mom got there to pick me up, I was fine. I don’t know if I had an intestinal block.

Your can buy Growing Up St. Louis: Looking Back Through The Decades here

Like millions in her generation, Linda (Seiferth) Gurney fell in love with the Beatles when she first saw them on The Ed Sullivan Show. Here is her story, from page 95 of Growing Up St. Louis: Looking Back Through the Decades.

I grew up in University City. I’m a professional musician and started learning music very, very early. I was already studying music for three years when I was seven years old, and we watched
Ed Sullivan every Sunday like a lot of people. One night, it just happened to be the night the Beatles debuted on Ed Sullivan. I didn’t know it was going to be anything particularly special, but,
oh my gosh! The girls were screaming, and the Beatles had a sound I found very exciting, even in my young years, and I was transfixed by it. I remember going upstairs to bed. It was hard to wind down.
I was laying on my back, and my legs were kicking.

You can buy the book https://merkels-books-and-things.square.site/

In the 1950s, Margaret (Tinius) Walker (left) was a polio poster child for the St. Louis March of Dimes.

This story by Margaret (Tinius) Walker is on Page 76 of Growing Up St. Louis: Looking Back Through the Decades by Jim Merkel. To buy a copy, go to https://merkels-books-and-things.square.site/

I got very sick with polio when I was three. I was burning up with an extremely high fever, and I was so sick, and in severe pain. I just remember waking up in the middle of the night and walking to the
doorway of my mother’s bedroom. I cried out, “Mom, Mom,” and then I blacked out and fell because I couldn’t stand anymore. The next thing I remember is hearing my mom and dad panicking. They
grabbed me and put me into a blanket, and lay me on the floorboard of the car, all the while panicking and getting upset.

We went to Children’s Hospital, and they refused me. They said they were full. Then they took me to St. Anthony’s Hospital, and they accepted me. Everybody was terrified they would get polio back then,
because they thought it was contagious. I woke up in an iron lung, and I was terrified. If I looked up with my eyes, I would see a mirror. I couldn’t turn my head or anything, but I couldn’t turn anyway. I was like a rag doll, so weak that I couldn’t move anything. And there were things hooked up to me. All I remember is a bunch of tubing, maybe four in each of my legs.

The picture above shows Darren Seals as a teenager in the 1980s. On page 128 of my book, Growing Up St. Louis: Looking Back Through the Decades, he relates that he netted $3,000 or $4,000 a month selling drugs when he was a high school freshman. “I got clothes, shoes, jewelry, girls,” he told me. “If you want a car, you’ve got to get out there and do what you need to get it.” He was shot four different times after high school, but turned his life around and is now a mentor.

The book is available at https://merkels-books-and-things.square.site/

I had special reasons to remember the Feasting Fox Restaurant.

Covering St. Louis’ South Side for the old Suburban Journals from about 2001 to 2009, I wrote about Marty and Sue Luepker, owners of the restaurant at Grand Boulevard and Meramec Street. I ate there and came to appreciate the fact that it was one of the last German restaurants in the Gateway City. Besides that, it was the venue for the launch parties for my first two books, Hoosiers and Scrubby Dutch: St. Louis’s South Side in 2010; and Beer, Brats, & Baseball: German-Americans in St. Louis in 2012. I’ll never forget the excitement of those first two events.

So I was saddened to hear that the eatery won’t reopen over the end of COVID.

“In 1993, we took a leap of faith when we decided to bring this historic building back to life and preserve a precious piece of St. Louis,” the Luepkers wrote in the restaurant’s Facebook page on Sept. 1 “.What began as a restoration project of the 1913 Anheuser-Busch Inn became an once-in-a-lifetime journey managing the Al Smith’s Feasting Fox Restaurant & Pub.

“COVID-19 has impacted every aspect of life and taught us the important lesson of slowing down to enjoy each moment. With the support of family and friends, we’ve decided it’s time to close the Feasting Fox and begin the next chapter of our lives,” they said.

I wish the Luepkers well after the closing and look forward to someone else reopening it.

For sheer chaos, few places in St. Louis County match Manchester
Road at Interstate 270. The West County Center, numerous
strip stores, office buildings and a mass of suburban homes in all
directions combine to bring more many thousands of vehicles a day
to Manchester just east of I-270.

Traffic is so great that eastbound and westbound lanes of Manchester west of the interstate separate, creating an island surrounded by congestion. People in the stores
and the Marcus Des Peres 14 Cinema go about their business in
the midst of the roar of vehicles just a two-minute walk away. But
not that long ago, it was quiet, almost rural. I know, because I once
lived in a house that today is within that island.
We moved there in the summer of 1956, with my oldest sister
Lois and my older brother Charles, around my fifth birthday.
Home was a one-story ranch house with white metal siding and
an adjoining two-vehicle carport on a dead-end street on the north
side of Manchester Road. To the east, the Manchester Drive-In
showed movies on the present site of the West County Center.
Behind our house was a barbed wire fence topped by an electrified
wire, formidable enough to keep horses inside and big folks out.
But I could crawl under it and wander through what seemed like
miles of trees and fields. In time, I discovered a quarry, perfect for
sneaking in with a friend and hearing the immortal words, “Hey,
you kids, get out of here!” I was on my own, to imagine all sorts of
wonders.
School intervened, and I attended kindergarten in the Mason
Ridge Elementary School on South Mason Road next to the
current route of Interstate 64. My teacher, Gretchen L. Kilpatrick,
wrote in my report card that “Jimmy has been a pleasure to have.
His sense of humour (sic) has pepped us all up at times. He tries
hard and is a good little worker,” But she offered a warning: “He
should work on his ‘scatterbrain’ forgetfulness though.” Nothing’s
changed. I’m still scatterbrained, and I still need to work on that
forgetfulness.
In first grade, the nuns at St. Clement Catholic School in
Des Peres had to figure out what to do with me, because my
parents were Catholic, and good Catholic parents sent their kids
to Catholic school. I paid great attention when the nuns instructed
me in the ways of the Catholic Church, including confession and
communion. I wasn’t sure whether my sins were sufficient for my
first confession, so I stole a nickel pack of chewing gum from a
store to make sure. 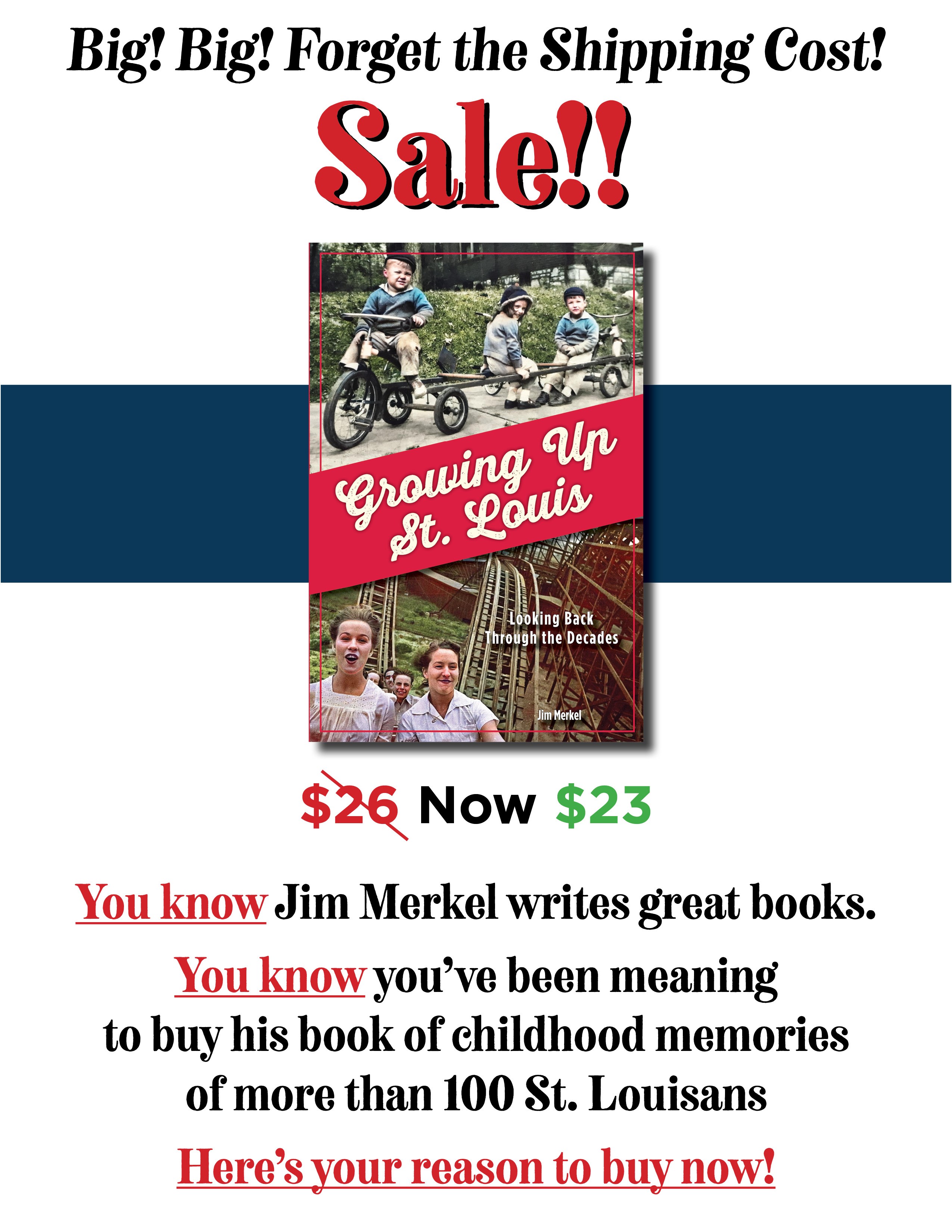